What do you do when a fragile desert ecosystem turns into a recreational playground? Leonard Gaydos, Coordinator for the U.S. Geological Survey’s (USGS) Recoverability and Vulnerability of Desert Ecosystems project, and colleagues are using satellite data to develop tools that will help Mojave Desert land managers decide what recreational activities to allow and where to allow them. Specifically, the research team is studying vulnerability and recoverability of desert lands.

“Our goal is to create predictive models of the desert that land managers can use to forecast what is likely to happen to a specific piece of land, given its exposure to various types of disturbances,” said Gaydos.

The Mojave Desert encompasses 125,000 square kilometers in southern Nevada, western Arizona, southwestern Utah, and a quarter of California. Situated between the burgeoning cities of Los Angeles and Las Vegas, it is within a day’s drive of 40 million people.

“The Mojave Desert is increasingly viewed as a playground,” said Gaydos. “It now contains four national parks, with millions of people around the edges.” That wasn’t always the case, he said.

“The Mojave Desert was a place you went to get away from civilization. You didn’t have to worry about disturbing anyone or causing any harm,” Gaydos said. In fact, it was largely for this reason that the U.S. military established most of its training facilities there. “It was the last piece of open space in the continental United States where the military could conduct training and not disturb anyone,” Gaydos said.

But, the Mojave’s growing pains make an ideal case study for researching long-term effects of disturbances to desert ecosystems. Land managers are now faced with the daunting task of dealing with competing demands on the land, including impacts from all-terrain vehicles, motorcycles, military activities, and grazing livestock.

“It is incumbent upon the U.S. military, the Bureau of Land Management, the National Park Service, and other land managers to understand the effects of these disturbances on the land,” said Gaydos. “All compact the soil and disturb resources at the land’s surface.”

The project requires a combination of expertise, involving researchers who have worked extensively in adjacent arid land regions, such as southern Arizona, the Grand Canyon, and southeast Utah’s Canyonlands. “The project’s multidisciplinary nature means that scientists on the project team are learning from each other,” said Gaydos. “We have geologists out in the field looking for soil crusts and counting tortoise burrows — not traditional tasks for a geologist.” 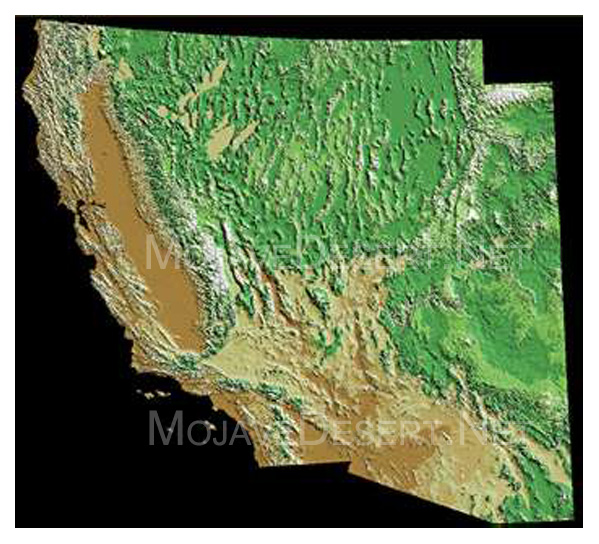 Shaded-relief model of the Desert Southwest (Image courtesy of the USGS Recoverability and Vulnerability of Desert Ecosystems project.

Remote sensing is one of the most valuable tools the team is using. “Satellite imagery enables us to look at the age and characteristics of a site’s surface geology, which is essential to understanding the rate at which that site will recover from disturbances,” said Gaydos.

The scientists use geologic maps created from Landsat 5 data, supplied by the EROS Data Center Distributed Active Archive Center (EDC DAAC) in Sioux Falls, SD. In addition, Landsat data have proved invaluable for identifying study unit boundaries when the team is working in the Mojave. The team also plans to use satellite data to examine dust movement in the desert, an important symptom of disturbance.

The researchers work with high-tech tools such as digital ortho-photos created by the USGS, and imagery from the Advanced Visible and Infrared Imaging System (AVIRIS). Digital ortho-photos are produced by applying corrections to aerial photos using an elevation model. “This process enables us to remove distortions from aerial photos so that they scale correctly, which helps us interpret what we’re seeing,” said Gaydos.

The multi-band capability of the AVIRIS sensor enables computer enhancement of land features, a vital part of the geologic mapping process. “This application of AVIRIS data is still experimental, but it shows lots of promise in mapping the surface geology of the Mojave Desert,” said Gaydos.

These tools have greatly contributed to some of the project’s key findings. First, the research team found that under most circumstances, land seems to recover faster in the years immediately following the disturbance than in later years. In addition, not all areas recover at the same rate.

“The good news is that the desert seems to recover faster than earlier models predicted. The bad news is that it still takes the land a long time to return to its original state, and, in some cases, it may never be exactly what it was before the disturbance occurred,” said Gaydos.

As an example, Gaydos described one of the project’s test sites that lies near an old railroad line built in the early 1900s. For the past 50 years or so since the railroad was abandoned, a berm has acted as an artificial dam for surface processes, such as erosion and runoff. By digging trenches on the slope side of the railroad line, team members measured nearly a dozen flood events. Successive flash-floods rinsed sediment down and built up the surface nearly a meter. “This tells us that we’re dealing with a very dynamic system in the Mojave,” said Gaydos. “At various intervals, flood events wash the sediment down, the plants adapt, and the desert renews itself.”

Land management ranks are also subject to renewal. To keep changing land management and restoration staffs apprised of current findings, Gaydos and his team must maintain regular communications with those in the field.

Sustaining investment is critical, according to Gaydos, because the project still has a way to go. “In the past, the Mojave Desert has been benignly neglected,” he said. “People haven’t worried about it much — it’s not Yellowstone or the Everglades, or any of the places that tend to come to mind when people think of protecting the environment.”

Fortunately, those values seem to be changing, and the desert “playground” is now deemed a valuable resource.

Migration- plants migrate. Plants are always looking for ideal conditions, conditions that help them live longer and better. This is a condition of life. Everything living does this. Inch by inch, foot by foot, generation after generation–plant populations move, march on toward better lives in more conducive environments. They adapt. They evolve. They move in the gradual changes of long-term weather patterns. We may not see it in our lifetimes, but we can in the histories find evidence of, and compile; this used to be here, that used to be there, relict populations remain if any. A seed grows here but not there, and a seed will sprout on this side and not that side. A slow dance extending much longer than we can personally experience, but a dance indeed.