“Two men were in charge of a station at Egan Canyon in Nevada. One morning a band of Indians captured them, after a battle. The chief chose to make the prisoners feed his braves before murdering them, and compelled them to cook an immense quantity of bread.  The Indians gorged themselves during the day, while the captives toiled and sweated over their cooking, probably no more cheerfully because of a promise that they would be burned at the stake at sundown.  A wagon tongue had been driven into the ground to serve as a stake, and preparations for their roasting were in progress, when in true story-book style, a company of cavalry happened along and saved them. This was the narrative given out as absolute truth in after years given by one of the men.”

from Outposts of Civilization – W.A. Chalfant

A common to abundant winter visitor to salt ponds, fresh and saline emergent wetlands, and mudflat habitats throughout the Central Valley and the central and southern coastal areas. Breeds from March to mid-July, and is relatively common during this period in northeast California, the Central Valley, and coastal estuaries. Common most of the year at the Salton Sea, but only a few pairs have been known to nest. 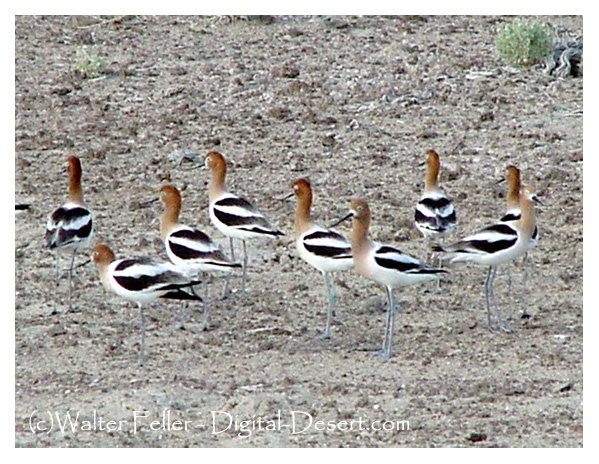 Forages on mudflats, salt or alkali flats, in shallow ponded areas with silt bottoms, and in salt pond. Feeds by probing in mud, sweeping bill through water or soupy mud, or by swimming and tipping-up like ducks. Preferred foods include aquatic insects, crustaceans, snails, worms, and occasionally seeds of aquatic plants
— State of California

These were spotted in the Saline Valley several hundred yards away from the salt lake shoreline. They would, randomly it seemed, all take off into the air, circle around and land in the same spot they left. I imagined that was an adaptation they have made to spot predators.

A gentleman coming from the Warm Springs walked up to me and we started talking. He told me this was a “lost” flock of American avocet that drifted into the valley long ago during a storm. They found the lake hospitable enough to stay — that every time they tried to leave, they just turned back after a short distance returning to the salt sink at the bottom of the basin that was now their home.

Maybe the guy was knowledgeable and truthful, but more likely he was passing along something he heard that was passed along by someone else who heard something and so on and so forth. You never know who you are talking to.

more about the American avocet

“BOOMER—Drifter who went from one railroad job to another, staying but a short time on each job or each road. This term dates back to pioneer days when men followed boom camps. The opposite is home guard. Boomers should not be confused with tramps, although they occasionally became tramps. Boomers were railroad workers often in big demand because of their wide experience, sometimes blackballed because their tenure of stay was uncertain. Their common practice was to follow the “rushes”-that is, to apply for seasonal jobs when and where they were most needed, when the movement of strawberry crops, watermelons, grain, etc., was making the railroads temporarily short-handed. There are virtually no boomers in North America today. When men are needed for seasonal jobs they are called from the extra board”