When I first moved to the Mojave Desert I found it funny to see these at the local lakes. I thought they had been shipped in to add ambiance to the park atmosphere. I was right–They do make it nice in the parks. But they came on their own.

Bird of the Day – Canada goose 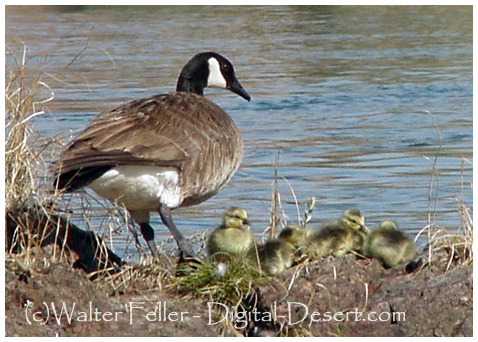 These geese, there were a Momma, Papa, and five or six little goslings on a tiny island made of rocks in the Colorado River. There was a nice backwater flow and I went around the island several times taking pictures.  Mom and Dad were concerned but not aggressive . I kept my distance and admired the little family.

I think the strangest place I’ve ever seen geese was at Saratoga Springs at the extreme southern end of Death Valley.  I certainly wasn’t expecting that.  Now that I know more about these beautiful creatures it doesn’t seem so odd.  They were probably just taking a break on their way south.