I called in all my Ghost-Writers here at Old Fort Oliver to help on this Ghost Town edition.

As we sat around the fireplace in my combination atom-bomb-shelter and wine cellar, the old timers told many of their Ghost stories, all have a slight flavor of the bottle. I have them scattered throughout this packet, not too close together, it was a big night, “for spirits.”

Old Jake Topper told about the noisy Ghosts he saw and heard up at Randsburg. Says he saw two skeletons dancing on the tin roof of the old Hubbard Printing Shop.

Determined to get a better look, he climbed a ladder to the roof of the White House Saloon next door, as he stepped off the ladder toward them the two skeletons stopped dancing and reached for their shrouds. Jake said it was sure eerie. 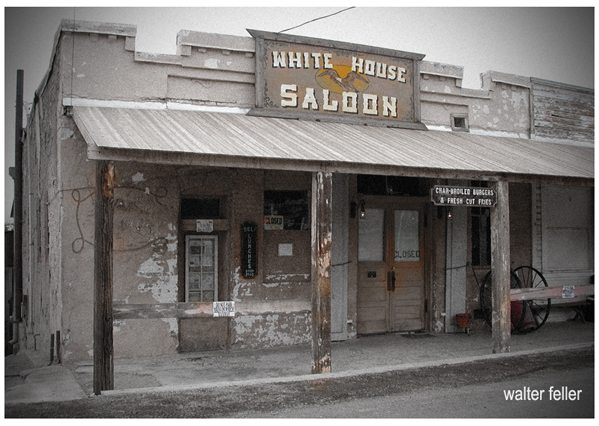 “The tall Ghost but his cold bon’y hand on my sleeve and said to me — as if he could see I was scared — don’t ever worry — look at me I would not be here if I had not worried myself to death — I thought I saw a tear in his eye-socket — but it was a moth. Yes sir said the Ghost, I was a newspaper man and I worried and worried, then I got so I worried because I could not remember what I was worried about.”

Right then and there — said Jake — I made up my mind never to worry again. So saying goodby and keeping worry out of my mind I started down off the roof, and by gosh, you know I fell down the last three steps of the ladder and broke my ankle.