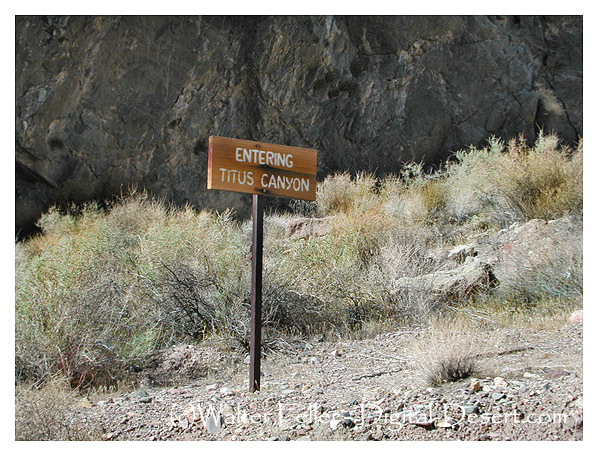 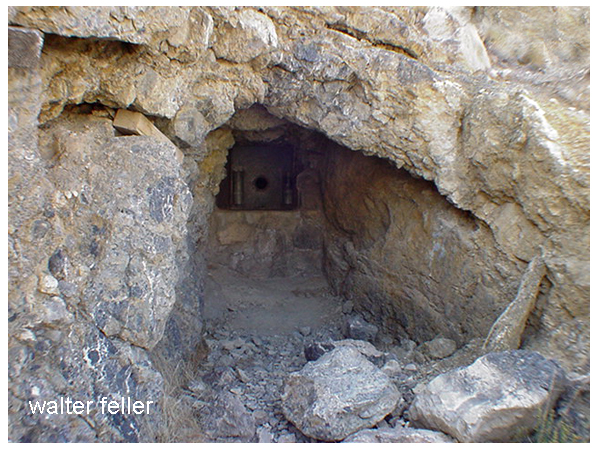 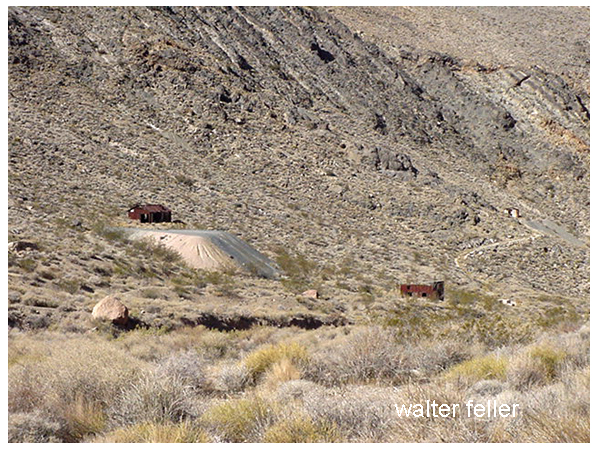 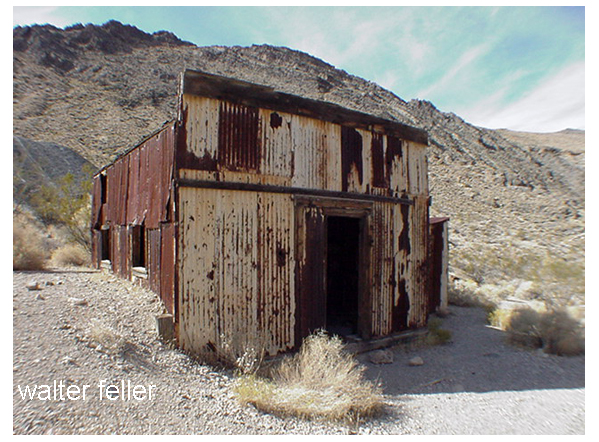 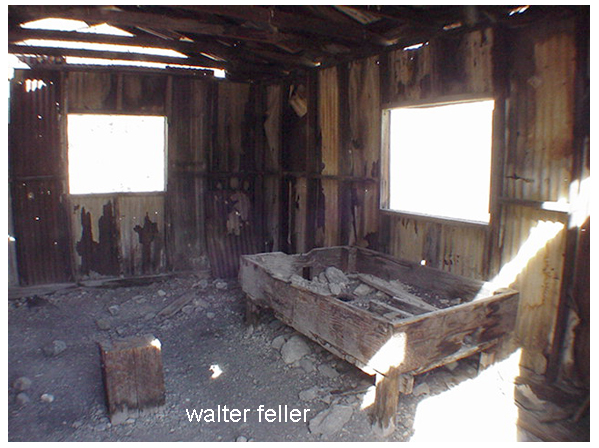 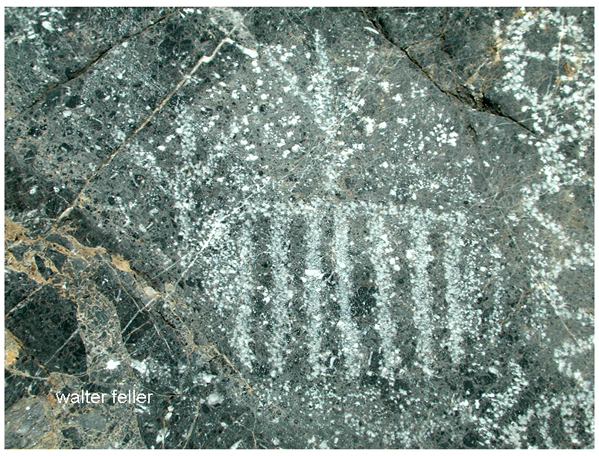 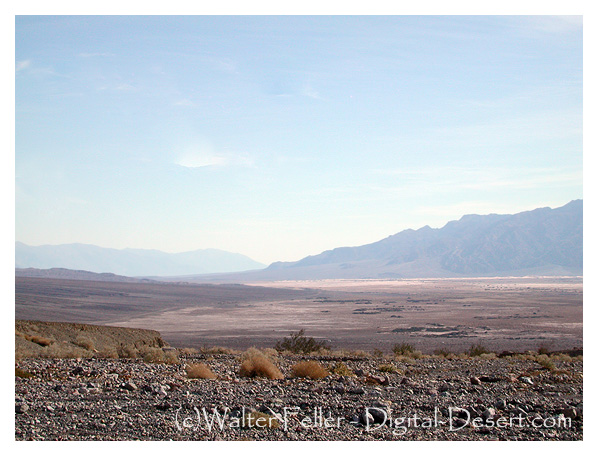 Skidoo came to life because of a fog. When Harry Ramsey and a man called One-eye Thompson lost their way on a road leading to the new boom camp of Harrisburg, they stopped to rest near a log lying against an outcropping of rock. When the fog lifted, the rock turned out to be gold. This was back in 1905. In deciding upon a name for the town that sprung up, a numerologist associated a popular expression of the day, 23-Skidoo, with the fact that a Rhyolite man named Bob Montgomery had successfully piped water from Telescope Peak 23 miles away and suggested the name Skidoo. So it became. 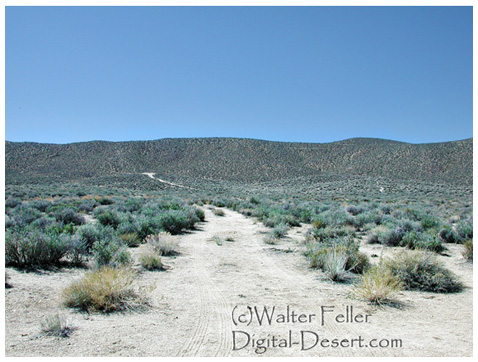 Old timers say the camp produced over a million dollars worth of gold ore between its discovery and its demise some 20 years later. Skidoo’s chief claim to fame, however, was not its riches. Rather, it was an infamous lynching of a scoundrel named Joe Simpson in 1908.

On a tour to the ghost town of Skidoo in 1962, we were privileged to be accompanied by an 87-year-old gentleman named George Cook. The interesting thing about Mr. Cook was that it was he who pulled on the rope at the lynching. His participation had only recently been divulged to a few intimate friends—after all others involved had passed on to their rewards, or whatever. 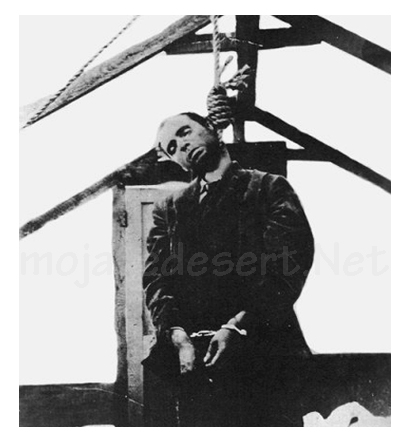 “Joe Simpson,” Mr. Cook told us, ‘was a would-be villain who had killed a man at Keeler after shooting-up Jack Gun’s Saloon in Independence the preceding year. He’d somehow gotten off and drifted to Skidoo where he became a partner with Fred Oakes in the Gold Seal Saloon. Across the street was Jim Arnold’s Skidoo Trading Company.

“Arnold was a friendly, well-liked man and had always been on good terms with Simpson, but Simpson became drunk and abusive one April morning and decided to hold up a bank situated in part of Arnold’s Skidoo Trading Company. Apprehended, his gun was taken away and hidden by the deputy sheriff, but a little later Simpson found his weapon and returned to the store to shoot Jim Arnold. He then turned on two other men who had come to the rescue, but his aim was poor and both escaped. Eventually Simpson was overpowered and placed under guard in the deputy sheriff’s cabin. Unfortunately,” Mr. Cook lamented, “the popular Jim Arnold died that night.”

Skidoo went wild with indignation. After Arnold’s funeral, which the entire camp attended, a group went to the improvised jail, led the prisoner out at the end of a rope and hanged him to the nearest telephone pole. When Sheriff Nailor from Independence arrived, after a hazardous trip over rough roads via Tonopah and Rhyolite, he made the now famous statement, “It’s the best thing that ever happened to Inyo County; it saved us $25,000!”

But this wasn’t the end. Several spectators had forgotten their cameras and wanted pictures of the hanging. So, Joe Simpson’s body was obligingly strung up again, this time from the ridgepole of the tent where he was “laid out.” News of this gruesome encore spread and the lynching won everlasting fame. In his private narrative of the event, George Cook added a factor never before related: “Joe was dead before we got the rope around his neck; he died of a heart attack (from fright) and was already gone when dragged to the telephone pole scaffold.”

It was also he, George Cook confessed, who assisted Dr. MacDonald in removing the head from Simpson’s corpse. The doctor, it seems, had once performed an operation on Simpson s nose and wanted to make a further medical study of the case. Going at night, they performed the severence at the lonely prospect hole where Simpson’s body had been tossed. (No one in Skidoo would give him a decent burial, so great was the indignation at his senseless crime). The skull was exhibited for a period in a showcase at Wildrose, but later disappeared.

The remainder of the skeleton resisted oblivion, however. Years later when George Cook returned to Skidoo to work in the mill, an agitated prospector appeared one day to report a headless skeleton of a man who’d evidently been murdered. Because Cook was the only old timer around at the time, he was consulted. Indeed a crime had been committed sometime, he agreed, but of the details he had conveniently forgotten.

Last year George Cook passed away. Small in stature, religious, mild-tempered and giving to writing sentimental verse, he was the antithesis of our Western idea of a vigilante. The role forced upon him by his acute anger over the murder of a friend bothered this good man to the end of his days. His belief that Simpson did not expire at his hand appeared to be a real comfort. And, perhaps he was right. We cannot disagree, for George Cook was there.

Much interesting history is connected with the now defunct Skidoo. Following its early boom, the town was deserted for a period, then, under new management, the mine and mill reopened during the 1930s and a period of production occurred. The old wild days never returned, however, and its fame as a mining camp still rests upon the lynching incident —to which we add, “Joe Simpson did not die because of a rope and a telephone pole. He died of a heart attack!”

Editor’s Note: This is but one version of this story, and it is worth saying that it has generated many other versions and stories through its telling.

In January 1906 two wandering prospectors, John Ramsey and John (One-Eye) Thompson were headed towards the new gold strike at Harrisburg. Along the way a blinding fog came in and the two camped near Emigrant Spring for fear of getting lost. … More …