The Indian troubles in San Bernardino County during the 1860s were not indigenous to a certain area. They were merely responses to a situation caused by the white man himself, as he gradually usurped — in Indian eyes — the new continent. 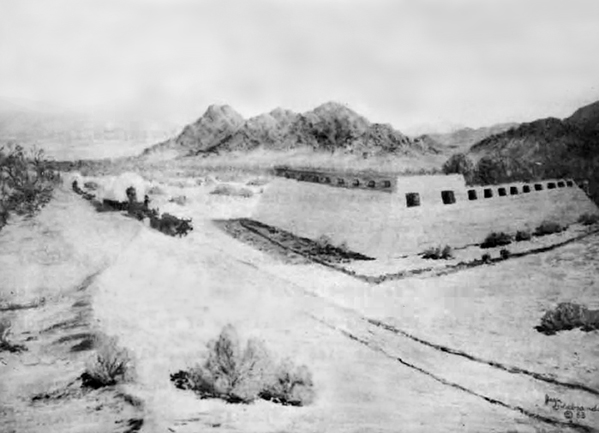 At first the Indians lost with resentment, then smoldering rage as the newcomers slaughtered his animals, stole the land and ravaged its natural resources without regard for the future.

Although held at bay for a time by the presence of troops, the fortunes of war gave them one last chance to strike back.

There were a few Indians like the Cahuillas  who welcomed the coming of missionaries and became Christians under the auspices of the Catholic Church, but others like Paiutes and Chemehuevis roamed free across the Mojave Desert; itching for a chance to gain revenge.

During the Civil War, sporadic Indian raids by these two tribes led to the establishment of Camp Cady  on the Mojave Desert and its troops regularly patrolled the Mojave Trail from Oro Grande  and Soda Lake in a more or less successful attempt to quell the problem.

This did not stop local incidents from happening, like the occasional stealing of horses or cattle from the San Bernardino mountains and valley, were the wounding of Dr. David N. Smith  at the upper gate of John Brown’s toll road in 1862. After his recovery, Smith founded what later became known as the Arrowhead Hot Springs sanitarium.

When the war ended, United States war department reorganized their Western forces and in the early part of 1866 withdrew troops from Camp Cady  and other points between Los Angeles and Fort Mojave.

Only a few weeks later,  at the Dunlap ranch (now the Las Flores ranch)  on the West Forks of the Mojave, H.E. Parish, Nephi Beamis and Pratt Whiteside were writing up a small canyon looking for strays when they were ambushed by Indians in their body stripped and mutilated.

Their deaths were attributed to the withdrawal of troops from Camp Cady  and the incident brought forth storms protest from incensed town citizens who gave them the largest funeral ever held in San Bernardino up to that time.

But the troop’s continued absence set the stage for yet another violent attack. in January 1867, a large band of Paiutes and Chemehuevis  invaded Little Bear Valley, apparently bent on stealing horses and cattle grazing there.

They burned a small sawmill and cabin standing near today’s Lake Arrowhead dam  and then continued up the valley, looting and burning another cabin near the present Lake Arrowhead Village.

George Lish  and John DeWitt, to local mill men, had just returned to the area with a load of provisions from downtown San Bernardino when they saw the Indians running towards them. Fortunately they had a head start and out ran the savages to nearby Talmadge’s Mill (now Blue Jay)  and bolted themselves within.

The following morning, after someone helped arrive from San Bernardino, and the women and children have been barricaded inside the mill, Frank Talmadge, Bill Kane,  Jonathan Richardson and Bill Armstrong took to saddle horses in a pack animal and started out after the Indians.

A fresh, 6-inch pack of snow made the Indian tracks easy to follow and at the head of Willow Canyon they surprised eight savages, who turned and ran. Talmadge and Kane,  On horseback, chased them down the canyon and were within shooting distance when the Indians suddenly jumped behind a large log.

As their pursuers galloped past, the Indians fired a volley of shots, wounding Kane’s horse, who reared and threw his rider heavily to the snow. as Kane fell he dropped his rifle in the Indians tried to kill him before he could retrieve it. During the furious scuffle, Talmadge   leapt off his mount in the shot and killed one Indian who was drawing a bead on Kane.

The savages then circled about Talmadge  while Kane, still unarmed, took refuge behind a tree.

Talmadge  was armed with the double barreled rifle and when he fired a second time without reloading, the Indians —  accustomed to fighting only with single shot weapons —  became confused and fled. Talmadge and his men,  shaken by the furious action, then returned to the mill, ending round one of the fight.

The following day, bolstered by the arrival of more men from San Bernardino, they started out again. This time they had just crossed a ridge several hundred yards from the mill when they met a force of some 60 Indians, armed with rifles and bows and arrows.

During the ensuing encounter both sides fought from behind trees, “Indian style,”  several hundred shots were fired, two Indians killed and two white men wounded before each side withdrew to tend to their wounded.

That evening, during a heated meeting held inside the mill, the men decided to mount a campaign to drive the Indians out of the mountains for good. For this purpose reinforcements arrived, including Indian fighter W. F. “Billy”  Holcomb, along with a wagon load of provisions from San Bernardino.

Although it was found the Indians had retreated to the desert, the heavily armed company followed them down,  determined to wipe them out.

Following Holcomb’s advice, they establish camps at the Dunlap ranch  and the Verde ranch on the Mojave River at Little Meadow  and every morning divided the group into smaller units with each following a different trail in trying to flush out the Indians.

They finally located the main Indian party encamped on a rock covered mountain northwest of Rabbit Springs. Although an attack was planned for daybreak and carried out, the Indians were forewarned by stray shots and most of them escaped.

But not for long. The chase continued and most of the savages were pinned down in small bands and destroyed one by one.

The entire campaign lasted 32 days and after it was over, some of the men almost died after running out of food and water.

But the operation accomplished its purpose. The troubles with the Mojave Desert tribes were over, and they would never attack in force again.

Chimney Rock
the site of the last Indian fight in California. To understand the climax …

Holcomb Valley, Big Bear
Chimney Rock in Lucerne Valley was the site of the last Indian fight in California. … Bill Holcomb formed a posse and followed the Indians but had to give up the

Chemehuevi History – American Period
After this, the U. S. Army established a military camp at Camp Rock Spring near … settlers organized a surprise attack on Indians assembled at Chimney Rock,