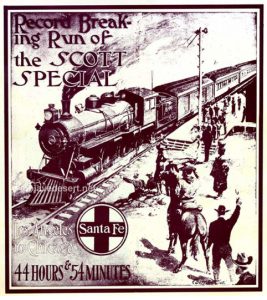 In 1905, in an attempt to break the speed record from Los Angeles to Chicago, Walter “Death Valley Scotty” Scott paid the Santa Fe Railroad a purported $5500 to rent a three car train pulled by 19 different steam locomotives. The trip began in Los Angeles on 9 July and arrived in Chicago 44 hours 54 minutes later, a record that stood until 1936  when it was broken by the Super Chief.  The  Barstow to Needles segment of the run took just three hours and 15 minutes. Also known as the Coyote Special.