In the early days, natural springs in what now is Lucerne Valley provided good camping grounds for Indians on their way into the San Bernardino Mountains together pinon nuts. The Indians  resented white pioneers settling in the territory and committed some violent acts against them. Instead of discouraging the settlers, caused them to marshal forces and attack the Indians  who were of the Paiute, Chemehuevi and Serrano tribes. in February 1867 a decisive battle at chimney rock caused the Indians to retreat and leave the territory to the white pioneers. (Chimney Rock is at the north edge of Rabbit Dry Lake. A quite complete story of the Chimney Rock Massacre is available at the Lucerne Valley branch of the county library.) 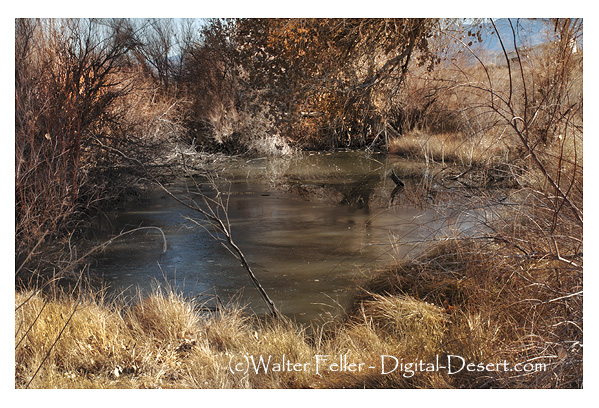 In 1884 Peter Davidson operated a way station at Rabbit Springs. Travelers could get fresh water, exchange news, rest and sleep over. “Uncle Pete” died in 1906. His grave is at the corner of Kendall Road and Rabbit Springs Road. 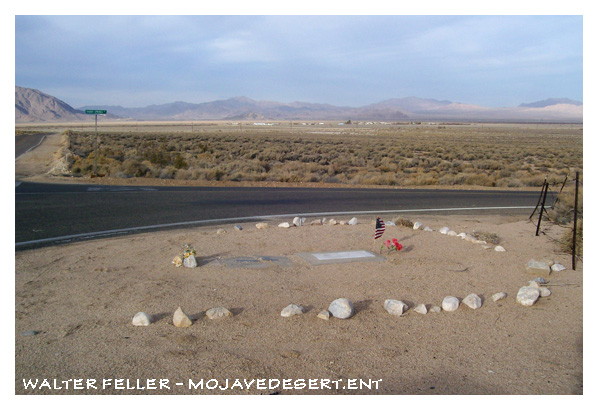 In 1886,  W. W. Brown brought his family to this valley, which was without a name at the time. Brown had the water rights at the Box S. (The Box S ranch is where the drainage ditch now crosses Highway 18.) The family stayed at “Uncle Pete’s” until an abandoned house could be moved on to the Box S property. 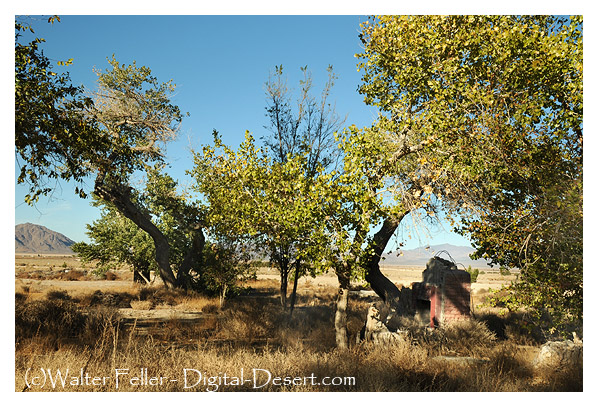 In 1896 Al Swarthout  acquired the Box S, intending to raise cattle. There was plenty of water but not much  forage. Swarthout and a friend found a place about 15 miles to the east, that had even more water and lots of forage.  after one year he gave up on the Box S  and moved to Old Woman Springs Ranch. (It is said the Indians used to leave their old people camped here while the young ones went into the mountains to forage for pinon nuts.)

In 1897 James Goulding came to the Box S  with his wife Anna and two small children, Mamie and George.  Three more children, Minnie, Jim, and Nelly were born in Lucerne Valley. “Dad” Goulding proved the fertility of our soil with his apple orchard, vegetable garden and alfalfa fields.  He also raised cows, horses and other animals. He dug a well which proved to be artesian. 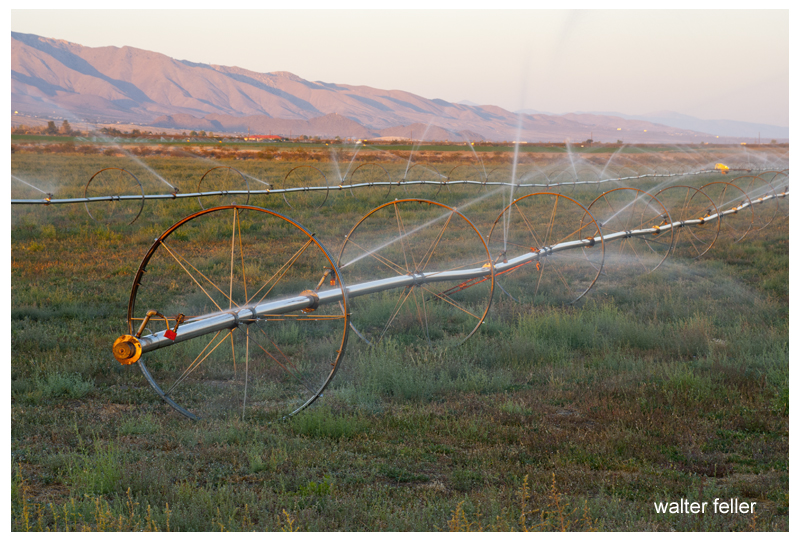 In 1905 a friend suggested to Goulding that this valley should have a name.  Because of his success in growing alfalfa (also  known as lucerne)  he christened this place Lucerne Valley.

Dad Goulding is generally acknowledged as the founder of Lucerne Valley. In 1907 Goulding legally established Lucerne Valley School District. Hanna Brown, a cousin whose family lived in near by Oro Grande, came to live with the Gouldings so the requirement of six students could be met. The school building was a former cook shack on wheels, 8′ x 18′.  With wheels removed and one end of the inside painted black for a blackboard, the school opened on September 9, 1907 on the Box S Ranch.

In the meantime, more families were settling all over Lucerne Valley, and Goulding donated property in 1910 for a new school where the Baptist Church now stands.

In 1912, people in the east end of the valley thought the  school should be closer to them,  so they formed a new school district  to be known  as Midway. Still another school district, Rodman, was formed in North Valley, in 1915. 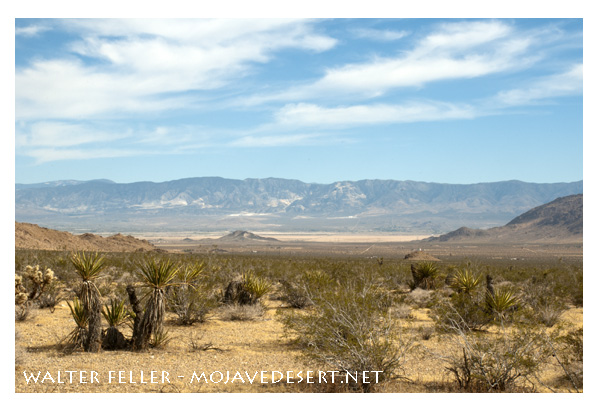 Then, in 1916, windstorms and fire destroyed both Lucerne Valley and Midway schools. all the students attended Rodman school until the other two were rebuilt, which took a couple of years  because of wartime problems. In 1920 Rodman School District lapsed and joined with Midway, which by then was in its present form.

In 1941 was certain school was condemned as unsafe and all  students went to Midway. The building and grounds were purchased by the Community Church ( not the present Community Church) and used until 1952. It was then that the building burned to the ground during a terrific  windstorm at night.  Construction was begun in 1952 on the new Lucerne Valley School at its present site.

Lucerne Valley’s library began in 1912 with 140 books in the front room of the Box S ranch house. Most of them were for school use, but some could be borrowed by local residents. In 1915 the library was at Midway school. In 1916 storm damage some of the books in the library was moved to the Boom Ranch on Wilshire, northeast of Midway. After being closed during World War I, both Midway school and the library reopened in September 1918. The library continued as a combination school-public library until March 1928, when it became a community branch of the county library system.

The Lucerne school building was condemned for school use, so the library moved in. When the church  bought the building, the library was moved into a smaller room there. Later it was moved into a small, narrow trailer behind the present China House.  Ethel Windschanz Clapton, the librarian, said that looking out the little, porthole shaped windows during a strong wind made her feel like she was on a sinking ship.

The library moved begin to the building which was occupied by the Sheriff’s office. Mrs. Vera Russell was one of the librarians at that location. The library then moved into the building generously provided by John Russell (Vera’s  son) at very low rent.  From there moved into its beautiful new permanent home for which ground was broken March 17, 1988.

Lucerne Valley post office was established in 1912 at the ranch of John and Rosa Koehly, who came here in 1909. It was on the southeast corner of Rabbit Springs Road and Post Office road.  (Have you wondered about the road name?) Rosa Koehly  was postmistress. Some days only eight cents worth of stamps were canceled, so that was the postmistress’s salary.

In 1935, the post office moved to a one-room building on the highway, west of the Box S Ranch, with Ed Smith as postmaster.  (Ed Smith was also a licensed electrician  and Scoutmaster of Troop 71,  Lucerne Valley’s first Boy Scout troop, from 1928 to 1933. Some of those scouts are still living here, among them  Harold Reed and Dick Owen.) 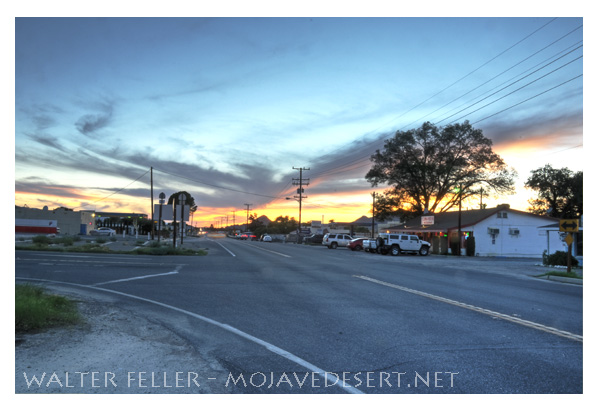 Later the post office moved again, to shared the Clark building with John Hutson’s and Irving Seeberg’s hardware store. ( The Clark building is now occupied by the China House.)  Flora and Clark was postmistress. The post office moved again to “the triangle”  on Verdugo Road at Oracle Road ( now renamed Oracel  by the county street sign makers.)  Early postmasters there were  Vern Ely and Ray Bonin. The post office is now in its permanent location on Highland Avenue south of Highway 18.

A volunteer fire department was first organized during World War II, along with fire watchers, skywatchers, plane watchers, civil defense, etc. In the early 50s a fire house was built with donated material (cinderblock) and volunteer labor.  it was located about where Shell gas station/ Halleck’s Market  is now. They had a unique system. People would phone Dick’s Center Store to report fires. Dick Grobaty would then press a button on his wall, which was wired to the siren on top of the firehouse. That was how the  volunteer firemen were summoned. The building was torn down after a  short period and the present County fire district was formed in 1962-63. At that time it still operated with volunteer firemen and one paid chief. 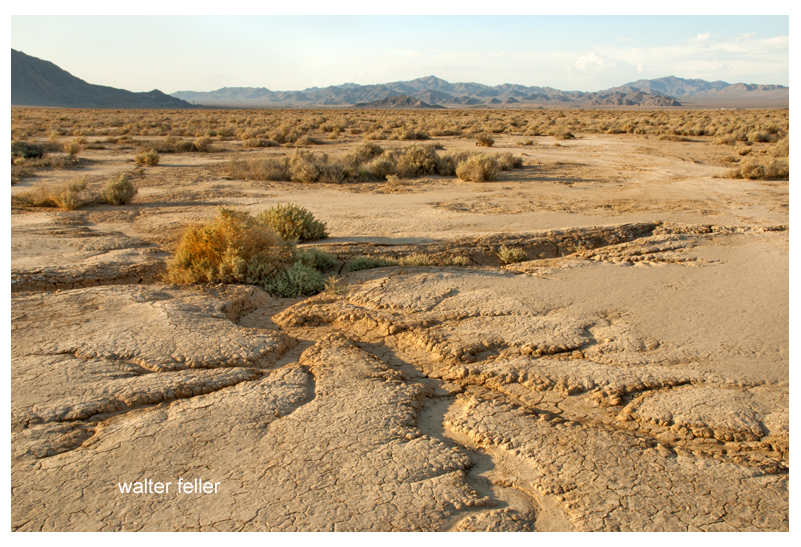 Some of the descendants of the early settlers still live here. John Russell’s father, William Russell in 1911 had filed on land called Lucerne Springs which brought son John here to live in 1949. He has been building houses and commercial buildings ever since. Also in 1911, Theodore P. Owen filed on 640 acres to miles north of Midway school his son, Dick, has come and gone but has lived here steadily since 1950. 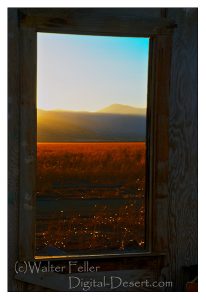 View from shack at Gobar Ranch

Athene Siewerda  was another very early settler. She was the first to have pistachio trees here. Her son, Joe Sherman, lives here now  Orlando (Jake)  and Mildred Jacobs came here in 1928. There were about 250 people in Lucerne Valley then. At the Jacobs home in North Valley, Jake bake 60 or 70 loaves of bread, sweet rolls, cakes and pies on Saturdays and sold them through Max Lewis’s grocery store. Later he rented from Goulding  the building now housing the Rosebud Gift Shop and established Homestead Bakery and Grocery. At that same time Mildred ran the Jackrabbit Café, located on land now occupied by Halleck’s Market.  In 1936 Jake in Mildred moved their house onto land they bought from the Southern Pacific Railroad, the southeast corner of Barstow Road and old woman Springs Road. The Jacobs  donated 10 acres of their land which is now Pioneer Park. As Jake’s health failed, Mildred gave up  the café  and ran the Homestead Bakery. She, along with other citizens, still found time to clear implant for the park, along with other citizens. The Jacobs had two daughters, Shirley Ann  and Millie Lou. Millie Lou lives in Maryland and Shirley Ann (Mrs. Bob Fuller)  lives in Apple Valley.

Ethel Owen came in 1946 as Ethel  Johnston and built Lucerne Valley’s first beauty shop.  Ethel  and Dick Owen  were married in 1950 in the old community church and their daughter, Lilli Ann, born in 1952, was dedicated there shortly before it burned down.

The foregoing was prepared by  Ethel Owen  on March 25, 1988 from material obtained from Lucerne Valley library and from her own memory. She apologizes for any inaccuracy of dates of facts and/or  omissions. There is much to be added that could not be contained in these pages.