September 1883 to California Southern Railroad, with Santa Fe backing, completed its line northward from National City ( just south of San Diego)  to San Bernardino. The next step was to build a line to connect with the Atlantic and Pacific Railroad’s line  from Albuquerque, New Mexico, to Needles, and the California Southern Extension Railroad was formed for this purpose. The A&P was known as the  35th Parallel Route and was a joint venture  by  the Atchison, Topeka and Santa Fe Railroad (the AT&SF  railroad became the AT&SF  railway in December 1895)   and the St. Louis in San Francisco Railway (Frisco). 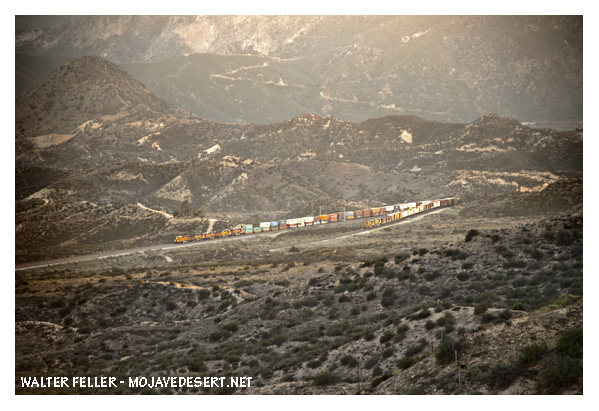 A railroad line across the Mojave desert from Mojave to Needles, at the Colorado River,  had been built by the Southern Pacific in 1882- 1883 to thwart the A&P’s  westward advance,  but was later acquired by the A&P  in a trade wherein SP  obtained Santa Fe’s line to Guaymas, Mexico. Prior to this swap,  the A&P  least the  Needles-Mojave  line from the SP beginning October 1, 1884, and its trains make connection with SP trains at Mojave.

The SP plan to build a line overcome would pass to connect its San Joaquin Valley line with its line from Los Angeles to El Paso, and kept a watchful eye for any activity that might indicate that another railroad was intending to build through the Pass.  Thus, when CSRR’s  chief engineer, Fred T Perris, and his survey party settled up their horses and headed eastward from San Bernardino through San Gorgonio Pass  at Beaumont indents to Morongo Valley,   some 40 miles (64km)  east of Cajon Pass,  SP observers were confident that this CSRR  had a different route in mind and would not attempt to build through Cajon. 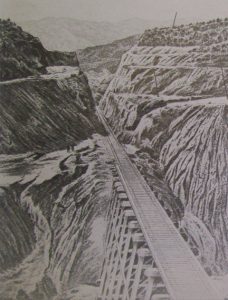 Then Perris, one certainly was not being followed, headed westward through Lucerne Valley in approach cone pass from the east by a more southerly route,  where the Pass  could be entered at a much lower elevation than the LA&I’s  abandoned, several miles to the northwest. No tunnel would be needed along this route, but extensive cutting and filling would be required in the first few miles below the canyon rim.

by the time the SP realized what Paris was up to, his party had staked a line through the Pass, and the California Southern Extension Railroad was soon being constructed between San Bernardino and Waterman Junction (shortly to be renamed Barstow after William Barstow Strong, president of the Santa Fe)  on the A&P The last spike was driven November 9, 1885, and the city of San Diego now had a rail connection to the east.

More than eight decades would pass before SP rails entered the Cajon Pass.