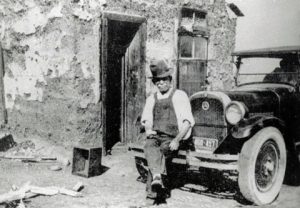 Once I asked Shorty Harris how he obtained his grubstakes. “Grubstakes,” he answered, “like gold, are where you find them. Once I was broke in Pioche, Nev., and couldn’t find a grubstake anywhere. Somebody told me that a woman on a ranch a few miles out wanted a man for a few days’ work. I hoofed it out under a broiling sun, but when I got there, the lady said she had no job. I reckon she saw my disappointment and when her cat came up and began to mew, she told me the cat had an even dozen kittens and she would give me a dollar if I would take ’em down the road and kill ’em.

“‘It’s a deal,’ I said. She got ’em in a sack and I started back to town. I intended to lug ’em a few miles away and turn ’em loose, because I haven’t got the heart to kill anything.

“A dozen kittens makes quite a load and I had to sit down pretty often to rest. A fellow in a two-horse wagon came along and offered me a ride. I picked up the sack and climbed in.

“‘Cats, eh?’ the fellow said. ‘They ought to bring a good price. I was in Colorado once. Rats and mice were taking the town. I had a cat.  She would have a litter every three months. I had no trouble selling them cats for ten dollars apiece. Beat a gold mine.’ 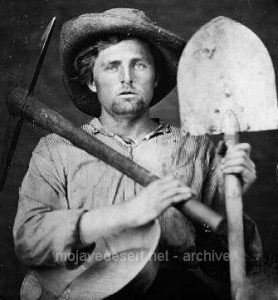 “There were plenty rats in Pioche and that sack of kittens went like hotcakes. One fellow didn’t have any money and offered me a goat. I knew a fellow who wanted a goat. He lived on the same lot as I did. Name was Pete Swain.

“Pete was all lit up when I offered him the goat for fifty dollars. He peeled the money off his roll and took the goat into his shack. A few days later Pete came to his door and called me over and shoved a fifty dollar note into my hands. ‘I just wanted you to see what that goat’s doing,’ he said.

“I looked inside. The goat was pulling the cork out of a bottle of liquor with his teeth.

“‘That goat’s drunk as a boiled owl,’ Pete said. ‘If I ever needed any proof that there’s something in this idea of the transmigration of souls, that goat gives it. He’s Jimmy, my old sidekick, who, I figgered was dead and buried.’ 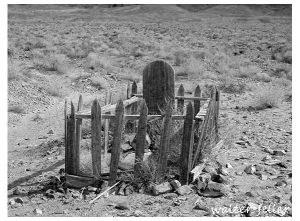 “‘Now listen,’ I said. ‘Do you mean to tell me you actually believe that goat is your old pal, whom you drank with and played with and saw buried with your own eyes, right up there on the hill?’

“‘Exactly,’ Pete shouted, and he peeled off another fifty and gave it to me. So, you see, a grubstake, like gold, is where you find it.”

from:
Loafing Along Death Valley Trails
A Personal Narrative of People and Places
Author: William Caruthers