A gentleman who has just arrived from the borax fields of the desert regions surrounding the town of Columbus, in the eastern part of the state,  gives us the following account of the sad fate of Mr. Jonathan Newhouse, a man of considerable inventive genius. Mr. Newhouse had constructed what he called a “solar armor,”   and apparatus intended to protect the wearer from the fierce heat of the sun in crossing deserts and burning alkali plains. The armor consisted of a long, close-fitting material;  both jacket no good being about an inch in thickness. Before starting across a desert this armor was to be saturated with water. Under the right arm was suspended in India rubber sack  filled with water and having a small gutta percha  tube leading to the top of the hood. In order to keep the armor moist, all that was necessary to be done by the traveler, as he progressed over the burning sands, was to press the sack occasionally, when a small quantity of water would be forced up and thoroughly saturate the hood and the jacket below it. Thus, by the evaporation of the moisture in the armor, it was calculated might be produced almost any degree of cold. Mr. Newhouse went down to Death Valley, determined to try the experiment of crossing that terrible place in this armor.  He started out into the valley one morning from the camp nearest its borders, telling the man at the camp, as he laced his armor on his back, that he would return in two days. The next day in Indian who could speak but a few words of English came up to the camp in a great state of excitement. He made the men understand that he wanted them to follow him. At the distance of about 20 miles out into the desert the Indian pointed to a human figure seated against a rock. Approaching they found it to be Newhouse still in his armor. He was dead and frozen stiff. His beard was covered with frost and– though the noon day sun poured down its fiercest rays– and icicle over a foot in length home from his nose. There he had perished miserably, because his armor had worked but too well, and because it was laced up behind where he could not reach the fastenings.” 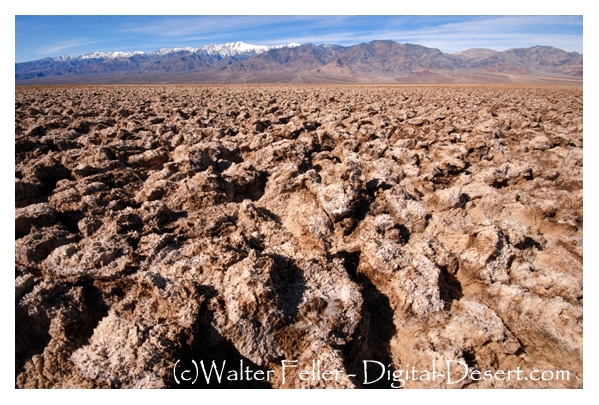 This was Death Valley’s most widely publicized death. It was one that was reported almost halfway around the world, and this terrible death, well, it never happened–it was simply a yarn as used as  filler on a dull day in that summer of 1874.