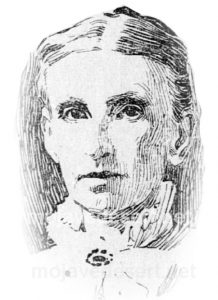 In December of 1849 anxious gold seekers and their wagons broke away from the Mojave San Joaquin Company (Mojave Sand-walking Company) to take a shortcut to the goldfields of California. Their map was incomplete and vague not informing these wayward pioneers of the numerous ranges of mountains between them and their destination. As a result they lost their way in the rocky canyons and sandy washes leading down into what we now know as Death Valley.

It was obvious to the travelers that Indians lived in the area, but they all had fled from the wanderers with one exception.  Both Julia Brier and William Manly, members of this band of Lost 49ers recorded the first known encounter with this remaining Timbisha Shoshone Indian.

The next morning the company moved on over the sand to — nobody knew where. One of the men ahead called out suddenly, “Wolf! Wolf!” and raised his rifle to shoot.

“My God, it’s a man!” his companion cried. As the company came up we found the thing to be an aged Indian lying on his back and buried in the sand — save his head. He was blind, shriveled and bald and looked like a mummy.

He must have been one hundred and fifty years old. The men dug him out and gave him water and food. The poor fellow kept saying, “God bless pickaninnies!” Wherever he had learned that. His tribe must have fled ahead of us and as he couldn’t travel he was left to die.

Excerpt from the December 25, 1898 edition of The San Francisco Call
Our Christmas Amid the Terrors of Death Valley – Julia Brier 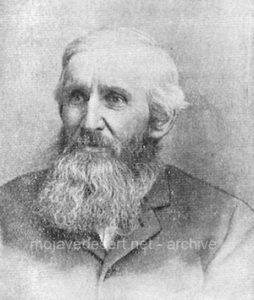 The following account of the same incident was written by William Manly in his book, Death Valley in ’49

Next morning I shouldered my gun and followed down the cañon keeping the wagon road, and when half a mile down, at the sink of the sickly stream, I killed a wild goose. This had undoubtedly been attracted here the night before by the light of our camp fire. When I got near the lower end of the cañon, there was a cliff on the north or right hand side which was perpendicular or perhaps a little overhanging, and at the base a cave which had the appearance of being continuously occupied by Indians. As I went on down I saw a very strange looking track upon the ground. There were hand and foot prints as if a human being had crawled upon all fours. As this track reached the valley where the sand had been clean swept by the wind, the tracks became more plain, and the sand had been blown into small hills not over three or four feet high. I followed the track till it led to the top of one of these small hills where a small well-like hole had been dug and in this excavation was a kind of Indian mummy curled up like a dog. He was not dead for I could see him move as he breathed, but his skin looked very much like the surface of a well dried venison ham. I should think by his looks he must be 200 or 300 years old, indeed he might be Adam’s brother and not look any older than he did. He was evidently crippled. A climate which would preserve for many days or weeks the carcass of an ox so that an eatable round stake could be cut from it, might perhaps preserve a live man for a longer period than would be believed.