in the summer of 1845, Benjamin D Wilson, own part of the interest in the Jurupa Rancho, site of the present city of Riverside, led a troop of Calvary in search of cattle rustlers.

Setting out from San Bernardino Valley, he divided his command. Most of the men he sent through Cajon Pass, keeping only 22 Mexican troopers with him to follow a trail across the mountains. Two days later, Wilson and his men reached the lake where they  sighted scores of grizzly bears. 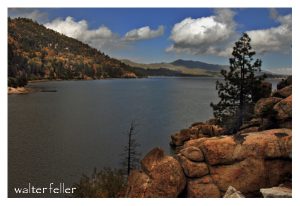 Most of the soldiers had been vaqueros. They formed in pairs and drew reatas, each pair attacking a bear. One looped a rope around bear’s  neck;  his companion  roped same bear by a hind foot. Then the men drew apart to stretch  the rope taut and hold the bear  a prisoner. They bagged and  skinned eleven bears, stretched  their  hides and continued across the mountains to join the rest of the command on the desert at Rancho Las Flores, on the Mojave River.

Here the reunited party engaged Indians in a fight, after which Wilson and his 22 vaquero-troopers returned home by the way of the lake. They again found the place overrun with bears, and the same 22 soldiers brought in eleven more bears– enough to give them a bear rug apiece as a trophy. It was then that Wilson gave the name of Bear Lake to the little body of water.

Years later the name was changed to Baldwin Lake. The name survives, however, in Big Bear Lake which was created in the site of the Talmadge Ranch in 1884 when a dam was built to provide a constant water supply for the Redlands District.