Relics lure as many folks into California’s wilderness today as did the precious ores of the 1800s. To get a piece of the action then, the needs were demanding and basic: a weatherproof disposition, an impenetrable faith against stark wilderness, and an inventive craftiness to second-guess nature. Today, it’s a mite simpler: a topographical map, an off-road vehicle, and a slight case of frenzied persistence. 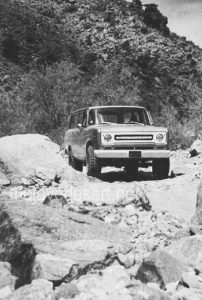 Historically, the San Bernardino Mountains were prospected and mined over a hundred years before the gold migration to the Mother Lode in 1849.

Indians and Spanish found in the San Bernardinos not only beauty and shelter, but trading commodities such as furs and minerals. Holcomb Valley gold, discovered in the early 1860s, created some new geographical problems peculiar to this northeasterly mountain location. The great Mojave Desert trough of Victor, Apple, Lucerne and Johnson valleys was closer than the southwesterly mountain slopes into the “civilized” basins of San Bernardino, Redlands and Riverside.

While selecting appropriate shipping routes from the Big Bear Lake vicinity, trailblazers and last-chance prospectors joined forces in the 1860s and began serious exploring and mapping of the
canyons east and north down to the desert flatlands.

Like all venturers, these men named areas as often by whim as by rationale. Rattlesnakes are common in high desert canyons leading into the mountains, and there are no less than three canyons and three springs in this region which still bear that viperous name. The Rose Mine
is located in another Rattlesnake Canyon (Burns Canyon to Pioneertown); the Balanced Rock Mine east of the Old Mormon Trail is located near another Rattlesnake Spring (between Apple Valley and Fawnskin). 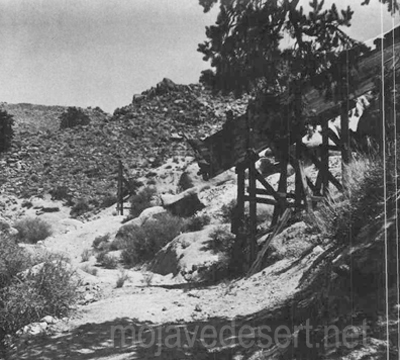 Once used to haul ore from the wooden chute the old wagon road is now covered with weeds and shouts of the wagon masters are no longer heard.

By 1870, the Black Hawk and Silver Reef Mining Districts had been established just a few miles west of Old Woman Springs. It is safe to assume that the initial digs in our Rattlesnake Canyon were made between I860 and 1880. Generous samples of pre-automation cans and shallow
tunnels marked with hand-hewn primitiveness hint at this. 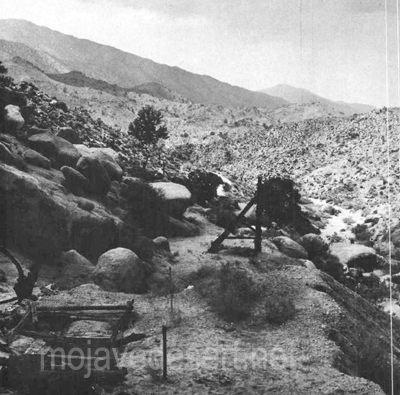 Looking
west toward the Bighorn Mountains (below) are seen the shaft, headframe
and tailings of the mining operation. Photos by Van P. Wilkinson

Getting into Rattlesnake Canyon today is not altogether simple. The westerly entrance, via Old Woman Springs, is through private property and prohibited. On Old Woman Springs Road toward Yucca Valley a set of telephone poles flanks the road on the north side. At one point about three miles east of Old Woman Springs there is a support pole on the south side of the road, where the asphalt curves. At this bend, where a taut cable crosses over the road, is the dirt road leading southwesterly into the Bighorn Mountains.

Gentle, dipping and dusty, this road covers some four miles across the alluvial fan toward the mouth of Rattlesnake Canyon. The trail narrows and winds near two private corrals at Two Hole
Spring. Then, abruptly, the road dives into the rocky, sandy wash of the canyon. From here to the major mining area (some five miles), it’s either high-clearance 2WD with non-slip differential or 4WD. Why? Because the tracks follow the granular riverbed and at times over breadbasket-sized boulders.

You’ll know you’re on the right path when you reach a cattle gate at the canyon mouth. A sign reads, “Close Gate.” Please do so—stray cattle yield lost revenue and irate ranchers.

Not more than 200 yards on up the southwesterly side of the canyon is Rattlesnake Spring, surrounded by a cattle shed and feed supplies. It was in this area that a couple of glaring bulls blocked the path of our truck while protecting a wary herd-Be careful.

The road dodges and cuts along the wide canyon floor for about two miles, narrow and sandy enough in many places to prohibit campers. Great banks of quartz sediment and loose conglomerate choke the canyon’s south side in a few places as the Bighorn Mountain slopes
begin to near the road. The northerly canyon banks show random mineral prospects and dune-buggy scars. 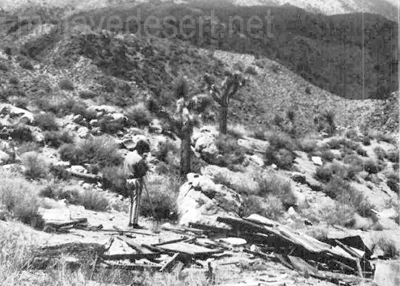 Ruins of a miner’s shack

Some three miles from the gate, the canyon walls move in and the road worsens. The tracks bend in several S’s; in this spot, rainfall or flooding would erase the path and trap a vehicle.

Then, the canyon widens at a gentle cluster of desert willows. Up the northeast canyon bank is a narrow 4WD trail leading to several shafts tunnels and collapsed out-buildings of the central
mining activity. One quarter of a mile further up the canyon, another, almost identical trail (but wider) leads in the same direction to a flattened prospector’s shack.

About one quarter of a mile along the canyon the road ends for all but the bravest with a very narrow 4WD vehicle; it is past this “road’s end” about 200 yards that a tunnel strikes west into the canyon wall. Here, in the tailings, is a collector’s “relic’in reward.”

The tailings of the 80-foot tunnel are small, but the abundance of undisturbed cans amidst the debris is amazing. Evidently, those who made it this far in the past were not after relics, just cattle or adventure.

However, the dumps and discards at the area of major activity have been partially investigated. The shafts were probably started in this region before 1900, but have been worked on and off since then—deepened and reinforced. The tunnels at this site are relatively new, and a nearby claim indicates that someone was still investing money in Rattlesnake Canyon as late as 1967.

A steep trail leads south from the flattened prospector’s shack, presumably paralleling the canyon trail to Mound Spring and the Rose Mine region. This is the direction from which explorers came in the 1860s. Another trail, marked on the map, heads southwesterly from
Rattlesnake Canyon up a subsidiary wash toward Granite Peak. Neither of these is for amateurs.

Whether you find in the Bighorn Mountains a chance to test your off-road navigation, or whether you find a relic to add to your collection, there’s one certainty: you’ll be bitten by the lure of Rattlesnake Canyon.