Skip to content
This compound is across the dirt road east of the lake. I’ve heard different things about what this complex is, was, was supposed to be and ended up being as well as a couple different things along the way. Mostly, at this point in time, it has been under construction.  It looks cool though and is one of the 7 wonders of Hesperia. I think it probably shrinks anyone who goes inside to about 3/4 scale. I have never seen anyone come out

Sometimes the scenery appears to be the same– It looks like that here and there and over there.  Look closer–this sameness is the differences. There are no gradual changes or blending. Everything is this or that.  Hard contrast.  Then, instead of becoming this faceless hole in our memory, we can become aware of our attachment to common reality.

I suppose the good news is, is that I got this photo of a shack in the little ghost town of Dolomite. I suppose the bad news is that I shot it in 2001 with a low resolution camera. Then again, some good news is that I doubled the size of it and cleaned up a few rough spots on it with my fancy software. And I suppose the bad news is, is that for all my efforts, Dolomite isn’t an authentic ghost town. I’m finding out that it was built for a movie set. It is a bit of good news that the movie was Nevada Smith starring Steve McQueen, one of my favorite movies. The bad news is that I won’t e able to reshoot it because of circumstances beyond my control at the moment. That’s good because it was on private property. It could have been worse when I was caught trespassing the first time. The owner chased me down and started giving me hell for being on his property. So it was a good thing I told him I came in a few miles over and followed the base of the mountain shooting some other ruins while I went along. It was another good thing when he laughed at my little truck and said, “I wouldn’t think you could make it through there in that.” I told him I was just taking some pictures. He told me to “Have at it.”

At least I didn’t get shot.

Desert pack rat nests can be used by the same pack rat families for generations and generations.

This rodent is commonly known as the “pack rat” or “trade rat” named for collecting any shiny or metallic object it fancies. Its burrow is easily recognized by the rubbish littered about the entrance.

More about the wood rat:
https://digital-desert.com/wildlife/rodents/desert-woodrat.html 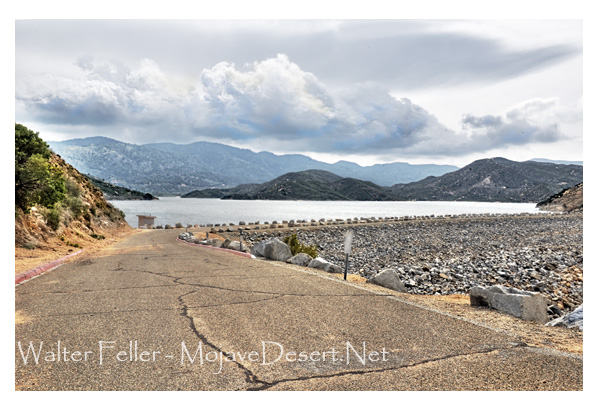 This is Silverwood Lake. It is named after some guy named Silverwood rather than the silver wood that grows around the lake and Summit Valley. Before they could have the lake there had to be the dam. The dam in this picture is Cedar Springs Dam. Before the dam there was Cedar Springs. It was a small town. It was flooded to make the lake. Everyone moved out first. Some other stuff happened here before that.