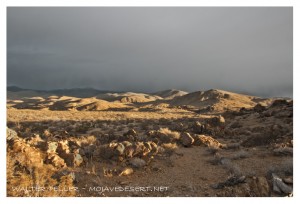 My friend’s mother used to tell me these stories about the desert. I loved them–nothing like sitting there listening to her–so interesting.

The man was of modest tastes and the money he had from the gold lasted quite awhile, but got spent as money tends to be. Of course he remembered the gold high up in the bare mountains, and there went and loaded up again. Over the years he went again and again. He didn’t need much so he didn’t take much, and when he died there was so much more left on the mountain. Just laying there.

My friend’s mom claimed this man told her where the place was. She said it was easy to get to yet required a little trickery to keep from being followed. “Nearly in plain sight,” she would tell me. A nugget or two or three here and there. Even now days no one gets suspicious. It doesn’t take much to live if you live a certain way.