The Mormon Road going south across the Oro Grande Wash would come up and head straight into the Joshua trees and juniper woodland.  The slope was fair, the ground hard and the trail reasonably straight.  There were variations, though.  To the eyes of one, one way around a bush may look easier than it does to another.  Trails evolve.  If one branch is significantly better than another, that branch becomes wider and more popular. These branches and shortcuts may join together later.  These variations due to mankind and weather begin a process I have heard to be called, “braiding.”  It is quite possible for the main alignment, the busiest, the center-most version in the corridor to remain in use providing its continued existence to this very day.

… Jefferson Hunt had rejoined his family at Salt Lake Valley after the close of his military service, and he was called by President Young in November of 1847 to return to California to purchase seed, livestock and supplies for the people of the Church. There were eighteen in the company, including his sons, Gilbert, John and Peter Nease. On this trip they suffered greatly for food, having to subsist for some days upon the flesh of their work mules, but through all such ordeals, Great Grandfather rose to the occasion and manifested the great strength of body and mind necessary for a wise father and leader of men to possess. The little boys, John and Peter, suffered greatly on this trip, being only 14 years old and not accustomed to starving. They returned to Salt Lake in May, 1848, bringing horses, mules, cattle, seed and provisions. During the following two or three years he acted as pilot and guide to companies of gold seekers going to California.

In 1851, Jefferson Hunt was called by the leaders of the Church to go with Apostle Amasa Lyman and Charles C. Rich to establish a Mormon colony in San Bernardino, California.

With the coming of Johnston’s Army to Utah in 1857, Jefferson Hunt responded to the call of Brigham Young, and with the other loyal members of the church they left their homes in San Bernardino and came to Utah.

His service to the State of California was recognized in tribute paid to him by the California historian Ingersol: “Captain Hunt was a man of strong character, deeply religious by nature, he believed with his heart in the divine revelations of the Mormon Doctrines. Energetic, clear sighted and indomitable in will, he was especially fitted for the leadership, which he always acquired in whatever position he was placed. Generous to a fault, his home was open to his less fortunate brethren, and he gave a helping hand to many a needy man, saint and gentile alike for he was above petty distinction. He deserves a large place in the memory of the citizens of San Bernardino for he filled a large place in the early and vital events in the history of the town and country. While he served as legislator he introduced the bill to divide Los Angeles County from San Bernardino County, and has been known since as the Father of San Bernardino County.”
~

Adapted from a copy of an address given at the dedication of a monument erected at the grave of Captain Jefferson Hunt in 1950. The speaker was his great grandson, Jesse A Udall.

During the Spanish Colonial Period (1542-1821) in the American Southwest, the Spanish empire was competing for control over resources with the British, French, and Russian monarchies. They attempted to link colonies in the Spanish territories, later known as the New Mexico and California, by establishing trade routes to form a passageway across the entire Southwest desert region. The Old Spanish Trail was used commercially to link the towns that would later become Los Angeles, California, and Santa Fe, New Mexico, from 1829 until 1848. The abundant spring water available in the Las Vegas (meaning “the meadows” in Spanish) Valley made it an ideal resting point on the trail.

The presence of the valley springs also drew the Southern Paiute Indians, a nomadic people moving frequently during the year, who made the valley their winter homeland. They raised small crops near the springs in the valley, which provided water and food for the Indians inhabiting the area and later for travelers making their way across the desert.

The Las Vegas Valley would become an attractive place for other European-American settlers as well. One group of settlers looking for a new home was the Mormons–also known as the Church of Jesus Christ of Latter-day Saints–a religious sect organized by Joseph Smith in New York in 1830. Based on the Book of Mormon, which Smith said was revealed to him by heavenly messengers, this religious body felt called to restore the authentic church established by Jesus and his Apostles. The history of the Mormons is dramatic–filled with persecution, an exodus from the eastern part of the United States, and ultimately successful establishment of a thriving religious society in a desert. The Mormons formed in upstate New York, an area where the Second Great Awakening was most popular as the United States underwent a widespread flowering of religious sentiment and unprecedented expansion of church membership. The group was forced to move several times because of conflicts with residents in various places where they settled, including Ohio, Missouri, and Illinois. They were accused of blasphemy and inciting slave insurrections. After Smith was killed by an angry mob in Illinois in 1844, it became necessary for the Mormons to find a new home once again.

A new leader emerged to guide the Mormons to a new Zion at the Great Salt Lake. Under the direction of Brigham Young, they began an arduous journey West to what would become Utah, where they arrived in July of 1847. In 1848, after the war with Mexico, the United States acquired the majority of what now constitutes the American Southwest. The Mormons petitioned Congress to become the State of Deseret, a word from the Book of Mormon signifying honeybee which was considered an industrious creature, but they were only allowed territorial status. Congress established the Territory of Utah, named for a local Indian tribe, and President Fillmore appointed Brigham Young governor in 1851. Young also became superintendent of Indian affairs. He oversaw the building of Salt Lake City and hundreds of other southwestern communities.

In the middle of the 19th century, the idea of “Manifest Destiny”–a phrase used to explain continental expansion by the U.S.–was embraced by many American people, including the Mormons. They began an industrious campaign to colonize Utah and beyond, establishing hundreds of settlements throughout the West and Southwest. As part of this process, Brigham Young called on volunteers to create a Las Vegas Mission, which would be strategically located alongside the Mormon Road (a portion of the Old Spanish Trail between New Mexico and California), halfway between the Mormon settlements of southern Utah and the San Bernardino Mission in southern California. There were eventually 96 settlements that included Lehi, Provo, Payson, Nephi, Fillmore, Beaver, Parowan and Cedar City. Meanwhile, the discovery of gold in California in 1848 made southern Nevada a corridor for westward emigrants and gold seekers. A gold seeker wrote in his diary on November 21, 1849 about stopping at the Las Vegas creek. Offering the only reliable supply of water for a 55-mile stretch along the Mormon Road, the Las Vegas Valley’s springs were important for watering the mules, horses and oxen of travelers crossing the region’s harsh desert environment. With the opening of the San Bernardino settlement in 1851, there was an additional need for a way station at the Las Vegas springs to provide supplies and rest. The mission the Mormons established as part of the Church’s westward expansion out of Utah became the first non-native settlement in the area, and the Mormons hoped to bring the American Indians into their flock. Although the Mormons occupied the site only from 1855 to 1858, it affected the development of what was to become southern Nevada.

The Indians had their trails which existed from before there was time and these trails went their natural way–from fire hydrant to fire hydrant. Explorers, typically in a hurry escaping from an attack, had to climb the fence. Pioneers had to cut a hole in the chain link and disassemble their wagons and carry them through the gap. 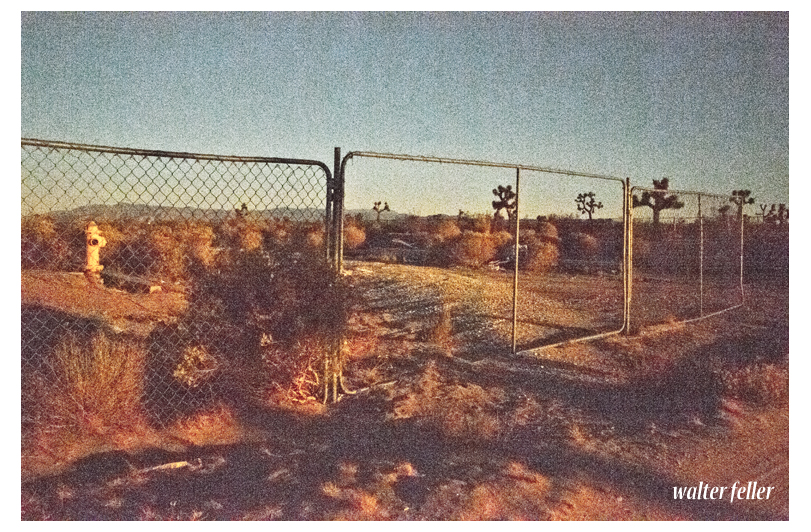 Then the bicyclists came and largely suffered flat tires and getting stuck in soft sand. Then we thought, “Why not use cars and trucks?” Then we built freeways that went around this unnecessary fence and stuff.

There is a book titled “Trails across the Mojave” that describes a fork in the Old Spanish Trail that splits off to John Brown’s toll road on the left and the Mormon Hogback and Sanford’s Pass to the southwest. Now the photo showing the fork located according to the directions provided most likely has no resemblance to what the original trail looked like if it were indeed at this particular point. I would say this fork is basically the same alignment in the same location as the trail was 150 years ago. The left goes to Cajon Summit while the right leads to Phelan to descend into the West Cajon Valley.

There is another important location to be remembered, it is the “Division of Trails”  that goes over Cajon Pass. The word “Cajon” is Spanish and means “box”. The steep sides of the formidable mountain pass made the name appropriate.  The rigors of El Cajon must be faced to arrive in San Bernardino Valley. The high Sierra Mountains were the last barrier to the weary travelers.

Here the trails divided. The left fork was the way used by the pack-trains of the Spanish traders and was called the Old Spanish Road. The other road was chosen by the Mormons for they had wagons which could not be pulled up or down the narrow canyon which the Spanish had followed. So, the Mormons made a bend westward to the right to avoid the higher portion of the mountains.  This division of trails is today a a few hundred yards to the east of Highway 395 at the crossroad of Duncan Road.

The Spanish trail turned back to the left and slowly climbed the summit, entering the edge of Horse Thief Canyon. From there they traveled down grade about 6 miles until reaching Crowder Canyon (earlier called Coyote Canyon), then from Cajon junction the road went south which is located today on the present Highway 66. This section in the 1860s and 1870s was known as John Brown’s toll road.