During the Spanish Colonial Period (1542-1821) in the American Southwest, the Spanish empire was competing for control over resources with the British, French, and Russian monarchies. They attempted to link colonies in the Spanish territories, later known as the New Mexico and California, by establishing trade routes to form a passageway across the entire Southwest desert region. The Old Spanish Trail was used commercially to link the towns that would later become Los Angeles, California, and Santa Fe, New Mexico, from 1829 until 1848. The abundant spring water available in the Las Vegas (meaning “the meadows” in Spanish) Valley made it an ideal resting point on the trail.

The presence of the valley springs also drew the Southern Paiute Indians, a nomadic people moving frequently during the year, who made the valley their winter homeland. They raised small crops near the springs in the valley, which provided water and food for the Indians inhabiting the area and later for travelers making their way across the desert.

The Las Vegas Valley would become an attractive place for other European-American settlers as well. One group of settlers looking for a new home was the Mormons–also known as the Church of Jesus Christ of Latter-day Saints–a religious sect organized by Joseph Smith in New York in 1830. Based on the Book of Mormon, which Smith said was revealed to him by heavenly messengers, this religious body felt called to restore the authentic church established by Jesus and his Apostles. The history of the Mormons is dramatic–filled with persecution, an exodus from the eastern part of the United States, and ultimately successful establishment of a thriving religious society in a desert. The Mormons formed in upstate New York, an area where the Second Great Awakening was most popular as the United States underwent a widespread flowering of religious sentiment and unprecedented expansion of church membership. The group was forced to move several times because of conflicts with residents in various places where they settled, including Ohio, Missouri, and Illinois. They were accused of blasphemy and inciting slave insurrections. After Smith was killed by an angry mob in Illinois in 1844, it became necessary for the Mormons to find a new home once again.

A new leader emerged to guide the Mormons to a new Zion at the Great Salt Lake. Under the direction of Brigham Young, they began an arduous journey West to what would become Utah, where they arrived in July of 1847. In 1848, after the war with Mexico, the United States acquired the majority of what now constitutes the American Southwest. The Mormons petitioned Congress to become the State of Deseret, a word from the Book of Mormon signifying honeybee which was considered an industrious creature, but they were only allowed territorial status. Congress established the Territory of Utah, named for a local Indian tribe, and President Fillmore appointed Brigham Young governor in 1851. Young also became superintendent of Indian affairs. He oversaw the building of Salt Lake City and hundreds of other southwestern communities.

In the middle of the 19th century, the idea of “Manifest Destiny”–a phrase used to explain continental expansion by the U.S.–was embraced by many American people, including the Mormons. They began an industrious campaign to colonize Utah and beyond, establishing hundreds of settlements throughout the West and Southwest. As part of this process, Brigham Young called on volunteers to create a Las Vegas Mission, which would be strategically located alongside the Mormon Road (a portion of the Old Spanish Trail between New Mexico and California), halfway between the Mormon settlements of southern Utah and the San Bernardino Mission in southern California. There were eventually 96 settlements that included Lehi, Provo, Payson, Nephi, Fillmore, Beaver, Parowan and Cedar City. Meanwhile, the discovery of gold in California in 1848 made southern Nevada a corridor for westward emigrants and gold seekers. A gold seeker wrote in his diary on November 21, 1849 about stopping at the Las Vegas creek. Offering the only reliable supply of water for a 55-mile stretch along the Mormon Road, the Las Vegas Valley’s springs were important for watering the mules, horses and oxen of travelers crossing the region’s harsh desert environment. With the opening of the San Bernardino settlement in 1851, there was an additional need for a way station at the Las Vegas springs to provide supplies and rest. The mission the Mormons established as part of the Church’s westward expansion out of Utah became the first non-native settlement in the area, and the Mormons hoped to bring the American Indians into their flock. Although the Mormons occupied the site only from 1855 to 1858, it affected the development of what was to become southern Nevada.

From the parking lot of the Victor Valley Jr. High School Gym you will have an unobstructed view of the Victorville “V”.
Notes
In 1930 the Victor Valley High School site was where Victor Valley Jr. High is currently located. The Victorville “V” was placed on the side of the hill as a landmark for the high school. Keith Gunn, then high school football coach and shop teacher, later to become principal, spearheaded the project of the “V”. Southwestern Portland Cement Co. donated the cement and the students of the high school football team were responsible for the actual installation.
William E. Mutschler – 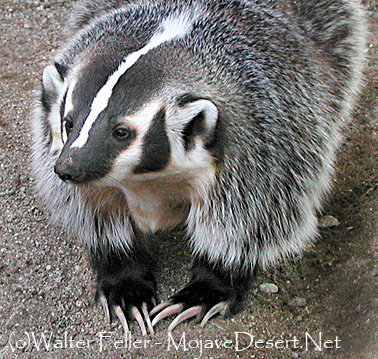 Much the same as for anywhere and anyone else, times were both good and not so good. Once, after a forty day stretch of having nothing but jackrabbit to eat, their pet badger found its way to the dinner plate. The Mitchell’s felt terrible about it, but what has to be done has to be done. From the experience, Jack came up with the following technique for preparing badger:

First remove the head and hide and probably the insides. Mix a generous amount of dish soap, a gallon bottle of PineSol, and a goodly quantity of Alka Seltzer together in a large wash tub. Don’t forget the Alka Seltzer because if you happen to taste the meat, or get some in you, the seltzer will fizz and the animal will think a rattlesnake crawled into its hole and it’ll come right out of you possibly leaving you alive. Soak the badger in it for six weeks. This will give the meat a shiny, silky texture when you take it out of the oven and gives the chemicals a chance to thoroughly penetrate the meat and saturate it with its subtle and aromatic chemicals.

Your badger is now ready for the oven. Next, find an old piece of concrete that will fit in the oven. Strap the badger to the concrete, surround with overly-ripe limburger cheese, then salt and pepper liberally. Be sure to tie the badger down tight to the concrete as you don’t want it to escape-it may still be able to. Place the whole thing in the oven that has been preheated to 500 degrees. Next, set the temperature to 2800 degrees and call in a fire alarm. After the fire is put out, open all the doors and windows to get some fresh air in the room, pry open the molten oven door, scrape the badger and cheese off the slab, throw them in the garbage and eat the concrete. I recommend serving with a sledge hammer and suggest a boiling pot of very strong coffee to wash it down. You’ll need it.

Wagon wheel furrows cut deep in the sand,
winding through desolate desert land,
on through arroyos, climbing a rise
to snow-covered mountains that reach to the skies;
ruts that the elements tried to erase
from the deserts redoubtable face,
but fate has preserved, through all of these years,
the trail of the wagon train pioneers.

We follow their route in a multi-wheel drive
and marvel that anyone could survive.
Through famines, and droughts, and blizzards and rain
on a rumbling ox-drawn wagon train,
and eke out a living from off of a land
of solitude, emptiness, cactus and sand;
Did they vision rainbows way over there
where we find a cauldron and the smog laden air? 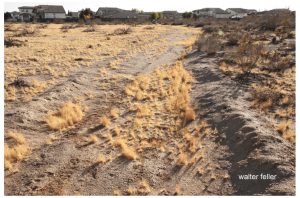 What will the future historians find
when they search for the trails we leave behind?
Will our many-lane highway be plain to see,
that leads toward that “Great Society?”
Or maybe they’ll excavate someday,
through atomic ashes to our freeway,
and wonder how anyone could survive,
on a careening, rumbling, four-wheel-drive.

16830 “E” Street
Directions
Proceed north on 6th Street (cross “D” street) to “E” Street and turn left. A “point of interest” sign marks the site of the jail which is currently being restored.
Notes
In 1907 the first jail “opened for business”. Constable Ed Dolch was instrumental in getting the structure built. Lack of running water or heat, plus the the type of punishment (helping to drain the nearby swamp), were deterrents to criminal activities. Originally erected on “E” Street.