It was a dry year, and nothing was growing around Jim Craig’s diggings. Nor was there anything to eat anywhere in sight. Jim struck out for the Colorado River to get a mess of fish. 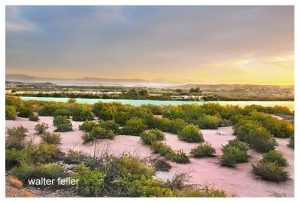 Sunrise at Jim’s favorite fishing spot on the Colorado River

He got there and started digging for bait, but he could not find any worms. First thing he saw was snake with a frog in its mouth. Jim grabbed a forked stick and pried the frog away before the snake swallowed it. He was going to kill the snake, right then and there, but he changed his mind. He gave the snake a drink of whiskey and let it go.

Jim stuck the frog on his hook, made a cast, and yanked a big catfish from the river.  Then, just as he began to look around for more bait, the same old snake came along with another frog. Right behind him, wriggling and twitching, were nine more snakes. And they all carried frogs. They dropped the products at Jim’s feet and then they held up their heads with their mouths wide open.