Skip to content
I was standing here one day taking some train shots and some guy told me this was where Say Davis Jr. had the accident where he lost his eye. I asked him if he knew if or not that it had been found? He told me it hadn’t and I told him I would look around before I left.

This is not where Sammy Davis Jr. was in an auto accident and lost his eye–it would have been found by now if it were!

I know. I went and looked for it. 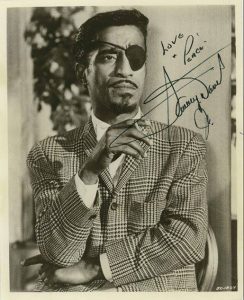 So I was curious;

Where did Sammy Davis Jr. Lose His Eyeball?

As he was making a return trip home to Los Angeles from Las Vegas, Davis lost his left eye to the bullet-shaped horn button (a standard feature in 1954 and 1955 Cadillacs) in an automobile accident on November 19, 1954, in San Bernardino, California. The accident occurred at a fork in U.S. Route 66 at Cajon Boulevard and Kendall Drive (34.2072°N 117.3855°W).

BTW; His eyeball is not there either–I looked. If the ‘Google’ says that’s it, that’s it!