Bill owned a chicken ranch out in the great wide-open desert. He was called to go to the big city to do some business and would be gone for several weeks. He asked his friend, Buck, to watch his chicken ranch while he was gone. Buck accepted and each and every day he fed and watered the chickens and gathered the eggs.

One day a rainy deluge swept across the desert causing flash flooding, panic, and havoc. The runoff from the rain destroyed all the chicken feed on Bill’s ranch. Since it would be a while before Bill returned, Buck was in a bit of a fix over the chicken feed. Buck went into the little town nearby to buy some more. He needed two sacks of feed but could only afford one. Buck, being the resourceful individual that he was, went next door to the lumber mill and bought a sack of sawdust. By mixing the sawdust with the chicken feed he would have enough to feed the chickens and keep them from starving.

When Bill returned from the big city all of his chickens were laying wooden eggs.

Now, everybody pretty much knows that wooden eggs are useless and it didn’t take but a minute or so for Bill to realize the predicament he was in.

Bill solved his problem by getting out of the egg business. 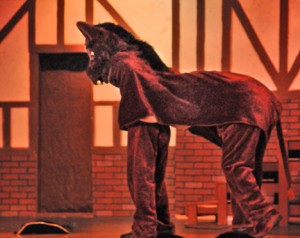 A stranger tied his horse at the rail near the window of Slim Riffle’s Owl Cafe, and left to look over the crop of tomatoes. The horse put his head through the window and asked for a martini with a dash of horseradish. The bartender mixed it and handed it to him. The horse drank it smacking his lips.

“I suppose it strange,” said the horse, “that I should ask for a martini with horseradish in it.”

“Hell, no, said the bartender, “I like it that way myself.”