“I was down in San Berdo the other day, and a man got me into one of them women’s afternoon fandangos;  you know, one of them afternoon affairs where they all talk and don’t say nothing.  And a “fly-up-the-creek” woman came up, all “a side-winding,” and said: ‘Now Mr. Scott, I’m sure in your desert travels you must  have lots of opportunities to do kind  deeds. What you tell the ladies the kindest deeds you ever did?”

“Well, lady,”  I says, ” let me think a minute. One time several years ago I been traveling all day on a horse, and I came in on a dry camp way up in one of the canyons. There was an old road leading up to it; hadn’t been used for years; but I noticed fresh tracks on it. When I got to the camp, there sat an old man and an old woman.  They must have been 70 years old  apiece. When they saw me they both began to cry, and I said: ‘ my goodness, how in the hell did you two ever get up here?’ Well,  they said, they were driving through the valley, and it was so hot they thought they were going to die, and they come up to this road and they thought it led to a higher place where it would be so hot, so they took it and got up there, and it was night, so they camped there all night in the morning they found their horse had wandered off. They had looked for him but he was gone, and they’d been there most a week and had no food. Well, I open my packet built a fire and made them a cup of coffee and fried some bacon and stirred up some saddle blankets (hot cakes)  for them, and say, you ought to see them two old folks eat! It cheered them up considerable.

We sat around the fire all the evening and powwowed, and they was a nice old couple. We all slept that night on the ground. They was pretty cold, so I gave them a blanket I had. The next morning I made them some more coffee and gave them some breakfast. I had to be going, so I packed up and got astride my horse. I sort of hated to leave the old couple; they seemed kind enough sort of people; but there was nothing else to do; so I said goodbye, and they both was crying; said  they’d sure die; no way for them to get out. They couldn’t walk. It was 100 miles from help, and there was no automobiles in those days. But I got on my horse and started off, and then I looked around and saw them two old people a-standing there crying, and, you know, I just couldn’t stand it to leave them old people there alone to die, so I’d just took out my rifle and shot them both. Lady, that was the kindest deed I ever did.”

“Well, you know all them bandits you meet when you go out; you got to tell them something,  ain’t you?”

“I suppose so, but it seems to me you might think up something better than that to tell at a ladies club meeting.”

“Well, that’s what I told that bunch, anyway. You’ve got to send up some kind of a howl if you’re going to be heard. There are so many free schools and so much ignorance.”

And Scotty lighted another fifteen cent cigar (he always smoked the best), … 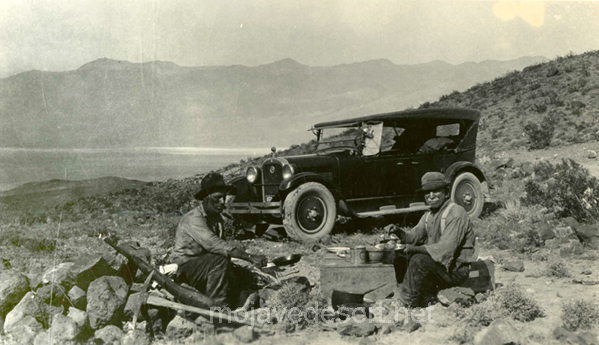 Shorty Harris and companion eating next to an automobile somewhere in Death Valley during the 1920s. Rhyolite, Nevada was founded in 1904 after Shorty Harris and Ed Cross discovered Rhyolite Quartz at the Bullfrog mine. By 1906 the town had two railroad lines and a population of 10,000. The mines, however, did not produce as expected and by the early 1910s Rhyolite was abandoned. Aurora, Nevada was a silver mining boom town founded in 1860. The heyday of Aurora ran throughout the 1860s (Mark Twain briefly lived there), but it slowly declined after 1870. It went through a rebirth in 1912 when a new stamp mill and cyanide plant were built at the mines. In 1917, however, the mill closed down and by the early 1920s Aurora was abandoned. Calico, California was initially founded as a silver mining town in 1882 but by 1890 the cost of recovering the silver became prohibitive. The town, however, continued to exist until 1907 due to the production of Borax.

At Furnace Creek ranch, Mr. Harris learned of the finding of three partially decomposed bodies between Lee’s camp in Echo canon and the Lida C. [sic] borax mine, at the foot of a low hill on the north side of the Funeral range. The presence of the bodies was first reported at Ash Meadows by an Indian, who was attracted to the spot by a band of coyotes and a …