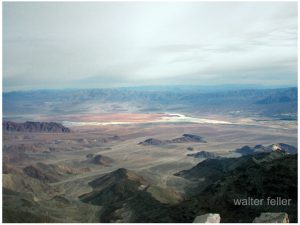 In 1849 in the rush to the goldfields of California the Bennett-Arcane party of the Mojave-San Joaquin wagon train decided to try an unknown shortcut and became stranded in what is now known as Death Valley.  Two young men, William L. Manly and John Rogers walked out, across the desert and into the canyons north of Los Angeles.  At a rancho in San Francisquito canyon they managed to get a white horse and a one-eyed mule as well as supplies then they walked back to those who were remaining at the camp.  Once they returned they led the lost party to safety. Following are their observations of the topography of the Mojave and how Manly claimed Death Valley got its name.

While waiting for the women Bennett and Arcane wanted to go out and get a good view of the great snowy mountain I had told them so much about. The best point of view was near our camp, perhaps three or four hundred yards away, and I went with them. This place where we now stood was lower than the mountains either north or south, but were difficult to climb, and gave a good view in almost every direction, and there, on the back bone of the ridge we had a grand outlook, but some parts of it brought back doleful recollections. They said they had traveled in sight of that mountain for months and seen many strange formations, but never one like this, as developed from this point. It looked to be seventy-five miles to its base, and to the north and west there was a succession of snowy peaks that seemed to have no end. Bennett and Arcane said they never before supposed America contained mountains so grand with peaks that so nearly seemed to pierce the sky. Nothing except a bird could ever cross such steep ranges as that one.

West and south it seemed level, and low, dark and barren buttes rose from the plain, but never high enough to carry snow, even at this season of the year. I pointed out to them the route we were to follow, noting the prominent points, and it could be traced for fully one hundred and twenty-five miles from the point on which we stood. This plain, with its barren ranges and buttes is now known as the Mojave Desert. This part of the view they seemed to study over, as if to fix every point and water hole upon their memory. We turned to go to camp, but no one looked back on the country we had come over since we first made out the distant snow peak, now so near us, on November 4th 1849. The only butte in this direction that carried snow was the one where we captured the Indian and where the squashes were found.

The range next east of us across the low valley was barren to look upon as a naked, single rock. There were peaks of various heights and colors, yellow, blue fiery red and nearly black. It looked as if it might sometime have been the center of a mammoth furnace. I believe this range is known as the Coffin’s Mountains. It would be difficult to find earth enough in the whole of it to cover a coffin.

Just as we were ready to leave and return to camp we took off our hats, and then overlooking the scene of so much trial, suffering and death spoke the thought uppermost saying:–“_Good bye Death Valley!”_ then faced away and made our steps toward camp. Even after this in speaking of this long and narrow valley over which we had crossed into its nearly central part, and on the edge of which the lone camp was made, for so many days, it was called Death Valley.

Many accounts have been given to the world as to the origin of the name and by whom it was thus designated but ours were the first visible footsteps, and we the party which named it the saddest and most dreadful name that came to us first from its memories.