Travelers packed everything on their backs, and wore any kind of foot gear.  Children always wore shoes; if the children were too small to walk, their parents took turns carrying them.  They also took turns packing the water jar, which was carried in a burden basket (ais) or a net.  Blankets, etc., were taken.  Women took cooking utensils, including  manos, but not metates.  Men took weapons and walked ahead.  Dogs accompanied the party.  Children were given something to carry; perhaps a small skin sack, but not a burden basket or net.  Travel along certain routes had to be timed so that people could be sure that there would be water available in drier sections.  Timing  was particularly important if some of these sources were tanks and sandstone potholes. 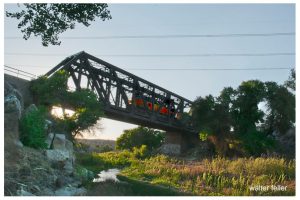